In Joshua Citarella’s book, 20 Interviews, commissioned by Rhizome, he presents an in-depth survey of Gen Z's online political forums and social media sites. Following his standard interview script, Citarella cycles through his predetermined questions, some of which include:

Who are *you* in this society?

What state is Nature in compared to today?

Across from him, mediated through Instagram DM, or Discord chat is someone, aged 15-23, who runs a political account on social media. The goal of the interview, ultimately, is to prompt detailed responses that illustrate how youth subcultures on the left and right imagine their positive visions of the future. Through this experiment, Citarella isn’t dredging chatrooms and forums for solutions or political roadmaps, but rather understanding the hopes and anxieties of a generation that has seen its future destabilized by climate change, lowered standards of living, and a dystopian level of income inequality.

Citarella takes this visioning process a step further with Left Futures, his new exhibition at Miami Design District with Bas Fisher Invitational and Bridge Initiative. The exhibition marks a return to the District for Bas Fisher Invitational, which was founded by artists Naomi Fisher and Hernan Bas in 2004 and went on to host dozens of exhibitions through 2012, in a space on 39th street that is currently the Versace Store.

For Left Futures, the future-forecasts recorded in 20 Interviews have materialized as two life-sized, hyper-detailed photographs, depicting different scenarios imagined by two of the interviewed accounts in the book. Citarella has taken these interviews and used them almost like ingredient lists for constructed meticulously photoshopped renderings of the futures that were described over chat. Printed true-to-scale, and hung just above the ground, the works are displayed so that viewers feel like they could step right into them. Standing in front of each of the works feels a bit like standing on the threshold of a world eerily similar to our own. 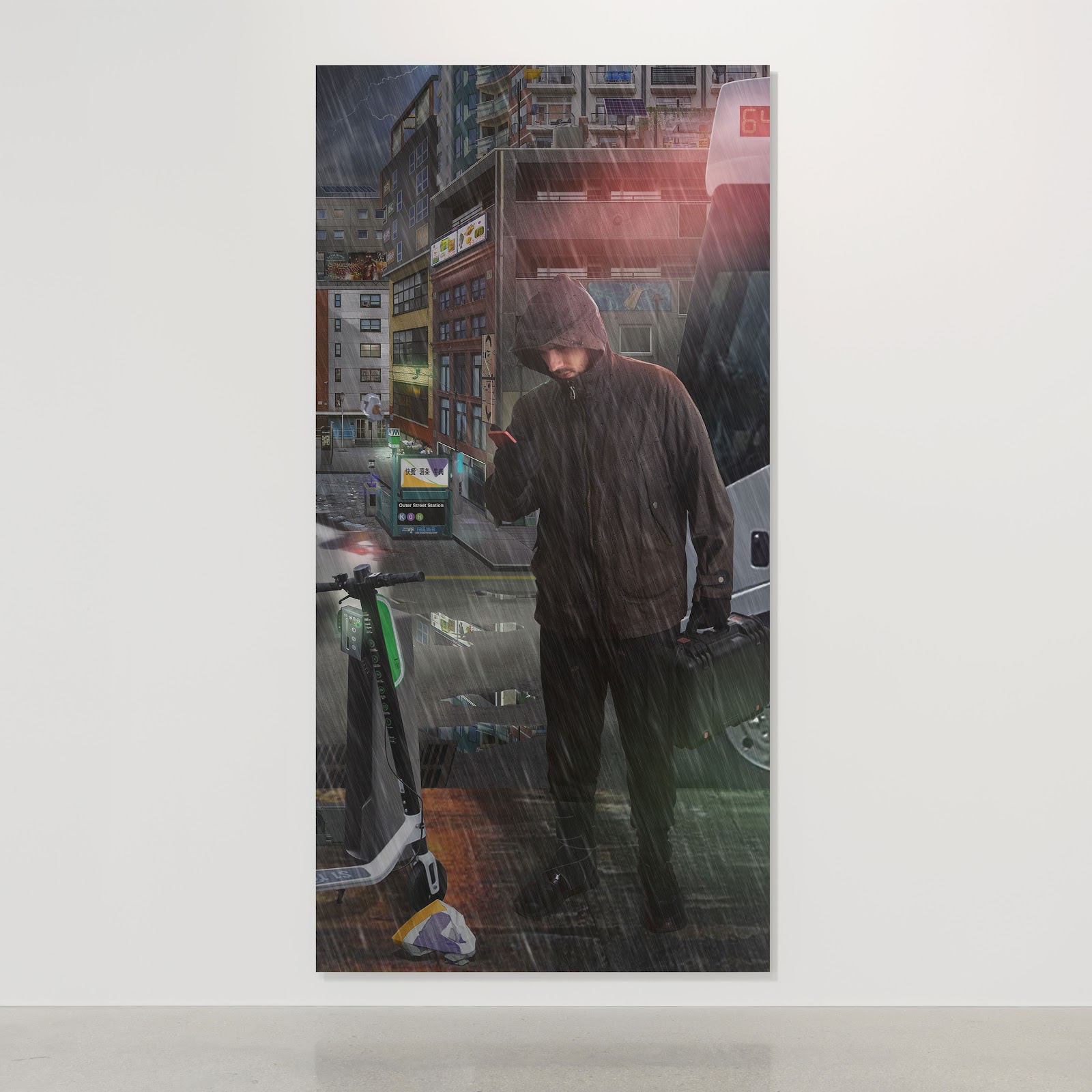 In Fully Atomized Side Gig Precariot (2021), it’s hard at first to tell if we're looking at someone’s vision of the future. The bleak image shows a gig worker running deliveries, navigating worsening weather, relying on increased public transportation, or perhaps a rental scooter. The price of fruits, fish, and meats seem to have skyrocketed. When the interviewee that provided this description was asked “What does cultural production look like?” they answered, “Spiderman movies might still be pumped out every few years”. This is a future that has been downcycled, as culture, labor, and life itself has been extracted in perpetuity until the system is still functioning but all the joy is gone. In the face of increasing pessimism, it’s not necessarily surprising to encounter this image, but the failure of the imagination to produce a vision of the future that can divorce itself from said pessimism is disheartening, to say the least. 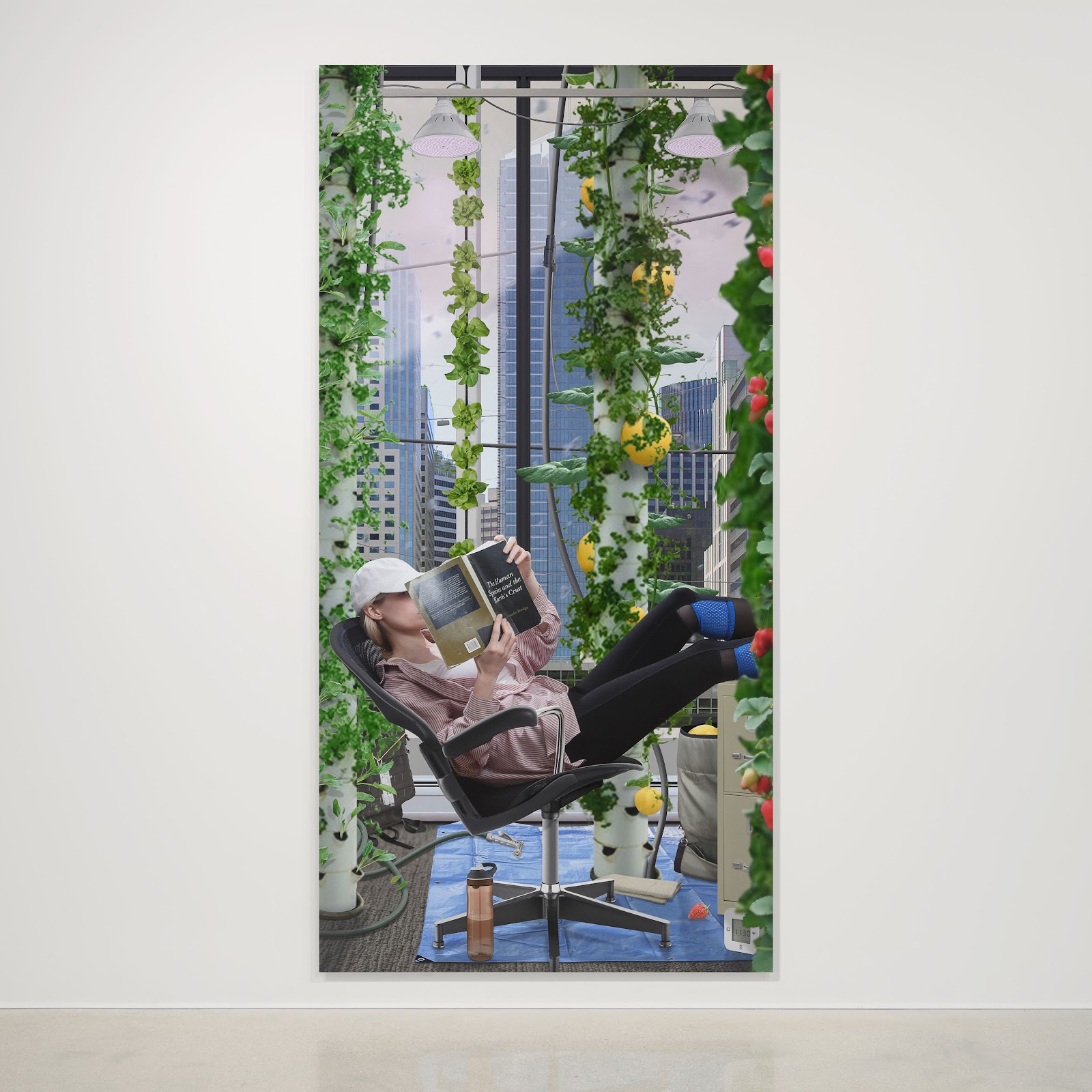 Across the exhibition space, another future faces us, and while it seems brighter, it’s still surprisingly structured by realism. In Use-Value Urban Repurposing (2021), a woman reclines and reads in a carpeted office building that has been tarped over to prevent water-damage from the newly installed hanging gardens. Far from Babylon, we’re looking at what a 16 year-old marxist-communist from the Bay Area envisions when asked “How is food produced?” (In the 10-40 year positive future they imagine): “Production is owned and managed by the society. The towers of finance capital will be repurposed into vertical hydroponic farms.” In contrast to the downcycled world across the room, Use-Value Urban Repurposing depicts a world of adaptive reuse.

Both worlds are firmly built from the foundation of today’s reality. Perhaps the zoomers Citarella has interviewed are too familiar with the scale of this crisis, and the failure of governments to address it by now, to articulate visions of the future that provide excessive hope or comfort. Watching Greta Thunberg’s documentary on Hulu last night, part of her address to the UN climate action summit feels relevant here:

‘Yet you all come to us young people for hope. How dare you. You have stolen my dreams and my childhood with your empty words.”

With an infinite amount of possibilities in front of us for how the future will look, and the survival prospects of countless species, including our own, jeopardized in many of those scenarios, we have good reason to believe things will get worse, and then, maybe better, but only if we (individuals, corporations, governments, and other coalitions) work towards that goal. Holly Jean Buck, in her book, “After Geoengineering” (2019), reflects a similar skepticism that whatever solutions we embrace as a planet willfully reject the systems that got us into our carbon mess, writing:

“There are both horrifying and mildly likable scenarios for how carbon removal might be accomplished. The horrifying ones are easy to conjure to mind, while the likable ones stretch the imagination. It would be easy to tag best-case carbon removal scenarios as utopias–even though they would actually be worlds that have failed to mitigate in time, representing at best a muddling through. That’s where we’re at: even muddling through looks like an amazing social feat, an orchestration so elaborate and requiring so much luck that people may find it a fantastic utopian dream”.

The two monumental works in Left Futures hang in front of me like doors on a reality show. Behind Door Number One, an exacerbated society, marching forward through worsening labor and climate conditions. Behind Door Number Two, a world in recovery, building back from capitalism's ashes. I’m ultimately left looking for my own personal Door Number Three, wondering what future I hope to see emerge in the coming decades.

Lee Pivnik is a visual artist living and working in Miami.

Left Futures is a part of Waterproof Miami, a series of site-specific artists’ projects presented by BFI and Bridge Initiative developed in direct response to the environmental issues facing South Florida, planned through 2021. Each project presents an opportunity for outreach, engagement, and action. Following the opening of Left Futures, BFI and Bridge will present a live-streamed climate-fiction roleplaying night, where Joshua Citarella and Holly Jean Buck, author of “After Geoengineering” (2019), will simulate a dystopian scenario game night and attempt to navigate a world of (not-so-distant) future climate collapse.

Joshua Citarella was born in 1987 in New York and currently lives and works in New York City. He is an adjunct professor at the Rhode Island School of Design and the School of Visual Arts. Citarella has held solo exhibitions at Higher Pictures in New York and Corcoran School of the Arts and Design in D.C. His work is included in the collections of the Stedelijk Museum, the Netherlands, and the Hood Museum of Art in the U.S.

By bringing artists and scientists together, Bridge curates public art that draws attention to the impacts of climate change in unique and engaging ways. As such, artists become cultural ambassadors and environmental advocates, inspiring a new generation to take action, while strengthening their own relationship to the natural world.

BFI is an artist-run presenting organization dedicated to creativity, experimentation, and discourse in contemporary art. BFI creates a bridge between Miami and the international art world by curating programs featuring both local and global artists at sites throughout Miami-Dade County, and in collaboration with national and international partnering organizations.